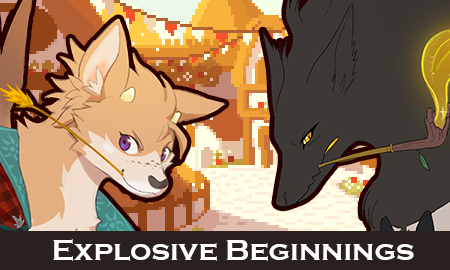 Aiza almost blew up. Two seconds late and she would have become a crispy goat. Thankfully, a group of crates saved her, and she silently saluted them as she passed them. Splinters and embers didn't stop her as she chased after the criminal.

She had to restrain him no matter what-- and put an end to their plan, before it was too late.

"Stop right there!" She yelled, bounding hot on his trail.

The culprit, looking disheveled and annoyed, brandished his scepter at her-- a hot, glowing fire shard at its tip. A quiet enveloped it before it shot a shrieking fireball at Aiza.

Another explosion occurred, casting the alleyway in bright white. Aiza wasn't lucky this time, and she felt herself slam against the wall.

She rose just in time to see the criminal miles ahead. He was heading straight toward the bank!

"Not happening!" Aiza exclaimed. Her breath equalized, and her legs glowed a hot white. Magic surged through her body, and she used it to rocket herself after the criminal. She hoped this was enough-- it was her last bout of energy!

The explosive power propelled her right into the criminal. Yelping, he dropped the scepter, and the two of them tumbled into the ground. Aiza rolled towards the weapon, reaching out to it.

"Gotcha!" She victoriously yelled. The pouf almost had it within her grasp when her vision began to blur.

She got up on one knee, wobbling towards the scepter. She could see a fresnel of darkness close in on the weapon.

No. Hang in there!

She was in arm's reach of it. She could almost feel its cool copper handle. She stretched for it.

And then, she saw nothing, and felt nothing.

Like an engine that gave its last cough of energy, she collapsed, fainting right in front of the scepter.

Surprised, the criminal poached the weapon off the floor and pointed it at Aiza.

But seeing that she was out cold, he simply kicked her aside and focused his eyes on the bank.

With a relieved grin, he broke into the iron building with a blast of the wand.

The thief continued blasting through walls like paper, until he confronted the ironshelled vault. But the steel clad room was no match for the scepter either, and it easily tore a hole through it with the biggest explosion yet.

Gold coins and bars cast an aura of yellow around the bandit. He kissed the scepter, giving the fire shard a gratuitous look.

"Finally… My prize." He chuckled.

The criminal reached for the gold, and was about to dive into it like a rich duck.  But he halted, noticing movement. Wait, was that gold alive?

The gold shimmered like water around him. Then, it solidified into smoke. He gasped and pointed the explosive weapon at it. But he hesitated, realizing his prize would become magma if he let loose. The pouf tried to evade the gold smoke, but it pinned him against the wall like a fly. He cursed, unable to move an inch.

The smoke, with a mind of its own, washed his weapon away from him. The criminal watched helplessly as his prized artifact was grasped by a large black colored vespire.

"Give it up. The guards will be here in a second.", Seren hissed, golden clouds wafting from her jaws.

"How did you acquire this scepter?"

"Found it on the street." He grinned.

The vespire growled, and the smoke pressed the thief against the wall.

He coughed and writhed, and began to struggle. "G-gack!'

The guards flooded the room, swords pointed to the criminal.

The captain approached Seren and sternly addressed her, "Enough, Black Mage. We'll take it from here."

Seren shot an annoyed look. "We have been tailing this guy for a couple of weeks. I need an answer from him."

The Captain sighed. "We can handle it… Please stop before you do any more damage to this investigation." She tugged at her cap, eyeing the building's damage with disbelief. "The mayor is already enraged enough."

Seren looked between the criminal and the captain. With the longest frustrated stare at the thief, she let him go and loomed over the captain, who reassured her, "I promise to give you any information we get out of him."

"Please do." Seren simply grumbled, dangling the scepter like a lollipop. "Like promised, I'll seal away this toy."

"Thanks." The captain lastly said, watching the vespire slink away to collect her apprentice. She gazed at the ruined bank and tugged at her cap exhaustingly.

"So much for mitigating the damage"

Aiza awoke to sounds of curious townspeople. She found herself behind a crowd of onlookers who pointed and peered at the gaping wound of the bank.

She looked around frantically, trying to find the scepter.

"Finally awake?" Seren asked, dangling the weapon. Aiza stared at it and her mentor, sighing in relief and melting back into the floor.

"Yes. The Roseacre guards arrested him."

Seren pointed to the hole of the bank, where some fires were still burning from the explosion. The fire fighting brigade were in intense combat with the flames, and the townspeople crescented around them, watching intently.

Aiza gulped, eyes swinging between the scepter and the destruction. Behind her, she could hear a distraught family mourn in the alleyway she came from.

The blast that had nearly taken her apart instead took out the whole block. Fires still burned there as well, and the family huddled together in disbelief. They were surrounded by bricks and rubble.

Aiza felt her heart sink,  recalling the events of her fainting right before grabbing the scepter. She stomped her poove angrily.  "Dammit… If I had caught him earlier… That wouldn't have happened."

Her mentor watched her fidget about frustratingly.

"You got further this time." Seren said, encouragingly.

"He still reached the bank and destroyed the block!"

Seren attempted to comfort her. She wasn't good at these things, so she tried her best:

"On the bright side you didn't lose any limbs." Seren stated, "Very common from dealing with the elemental shards."

Uh oh. That was a bit morbid. The vespire scratched her head guiltily.

Aiza gulped and reinspected her limbs, imagining their sudden nonexistence. That was the worst consolation prize she'd ever heard.-- Well, seeing them here was comforting… in a way.

"Still..." Aiza sighed. She gazed at the scepter wistfully.

"How am I supposed to become a mage detective if I can't even catch the culprit?"

She wished she wasn’t inept at magic. Ever since she was a child, she could barely do three spells in a day. She also couldn't even project magic, so there goes the dream of catching a baddie with a well-timed fireball. And of course, the icing on the cake… If she depletes her tiny magical store of the day…  she faints!

Her eyes glazed over the copper scepter. Seriously, who's heard of a mage detective that blacks out right when they get to the good part of arresting the bad guy? If she hadn't had that disadvantage, she could have stopped the criminal sooner. Maybe even prevented the block from blowing up.

She glanced up at the family weeping over their rubbled home. And what if next time she failed to catch an even worse criminal? Fear nagged her as she imagined the civilians getting caught in a devastating blast. Then, it evolved into a whole city in flames. Despair and chaos echoed in this theoretical scenario, and it sent a violent shiver through Aiza.

The pouf gave the weariest sigh, her back slumping over in discouragement.

Seren frowned at the distraught pouf and lowered the scepter down to her, awkwardly. "If it makes you feel better, you can store this one away into the chamber."

"You assisted in the investigation. I'd say that counts."

Aiza's head sunk so low it almost touched the ground. Seren had never seen the pouf so downtrodden. The pouf was practically a melting lump of sad.

Seren cursed internally. She really wasn't good at this emotions thing. She hoped she wouldn't have to resort to this but…

"You stopped him long enough for me to catch up. I was lagging behind…", Seren lied. She barely got to the criminal on time. "I blame it on those dandelion burritoes."

The vespire disliked using false claims, especially for fake stomach aches. But this time her assistant looked much too sad.

"Hah… I warned you! I told you not to eat it, Not with the spicy sauce too."

Seren cast a relieved smile. "My mistake. Oops." She shrugged.

Aiza sneered at Seren. The vespire began to regret her lie. She was going to hear about this for weeks… Regardless, the pouf seemed to perk up.

Aiza held a long grin at Seren before looking at the scepter in her claws. Then the grin disappeared, and a conflicted look replaced it.

Her mentor held it out closer. "So, do you want to seal it away yourself?"

She pushed the weapon back towards Seren, and with a cheesy grin, said, “One day I'll catch them on my own!"

An eager spirit replaced the solemness the pouf expressed before. She stood taller, head raised above the weapon, with an aura of determination. She puffed up her chest, her gnarly scar visible. Its black galaxy-like appearance shimmered slightly. "I'll just have to get better!"

She smiled cheekily. "Maybe I'll even become a better investigator than you old lady!"

The vespire teasingly patted Aiza's head.  "You'll need to learn elemental magic first." She pointed at Aiza's chest, where a red and black riftlike scar streaked across it. "And whatever that is doesn't count."

"You're lucky it hasn't done anything. Last thing a magical investigator wants is to become an anomaly themselves."

Seren turned, facing away from the destruction behind them, "Anyhow. We should head back to the carriage to seal this elemental shard."

With that, Seren broke through the crowd of bystanders. Aiza tailed after her hulking mentor as they parted through the crowds. The Roseacre townspeople were horrified, nudging eachother and pointing at the Black Mage and her apprentice as they created a rift in the sea of onlookers.

Their unamused whispers went over Aiza's head however-- crowd scrutiny was something she got used to over time as Seren's assistant. What she focused on was the distraught family that lost their home. She fantasized a better version of herself, defeating the criminal then and there before the alleyway, before the explosions. And that thought kept her ears immune from the harsh criticisms of the crowd.

She watched in admiration as Seren went through the crowd, head held high and confident, claws firmly gripping the confiscated danger to the public. Her mentor seemed like a mountain, no, a sky away from where she herself stood. An eager, lingering thought permeated her headspace as she once again, for the hundredth time, tailed after her mentor in complete awe.

She needed to get stronger.

This is a series of episodic stories i am starting for Aiza! Im pretty stoked. they will cover her journey as a budding magical investigator.