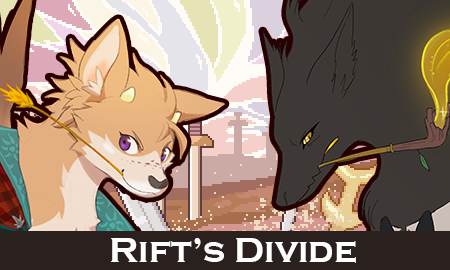 Tiny led Aiza towards a watch tower, pointing up towards it. “The twins who can help you find your lost one are up there. They’ve helped out a couple of other Woolynes and Pouflons the last couple of days. Look for them with their long horns and starry fur!”

He grinned, then gave an eager look..

Aiza took a confused look back, after stepping forward. “Never heard of ‘em!”

“AH… I see.. Sorry. I was just curious.” Tiny said, scratching his cheek embarrassingly. He couldn’t help but to ask, after all the pouflons he’d seen were regarded as mythical creatures where he had come from.

Aiza thanked Tiny, gave him a grin, before flying up towards the watchtower.

A circle of pouflons sat at the top of the tower, surveying the skies and land from up high. Caramel, an earthtongue mage covered in plants, had positioned herself comfortably with a telescope held by vines and roots, watching the horizon. Reina, a stern knight, stood tall, her maroon frame leaning over the edge as she kept eyes on the wall of the camp.

Aoife, the red vespire Aiza had seen days before in the Aequorean temple, took a post on the opposite side of the two, gazing into the horizon.

And in the center, sat two peculiar pouflons, of whose colors and patterns resembled the night sky. Stars dotted their fur, and seemed to be twinkling. Both had long single unicorn horns, and pupiless, ethereal eyes.

They were all conversing as they kept watch over camp.

"A few corrupted are heading to the west…" Caramel noted, writing down her observations, a vine holding her quill.

"That makes another corrupted group moving towards the same direction the past couple of days..." Aoife said thoughtfully, raising a claw to her chin. "Could they be making a formation of some sort?"

Reina huffed. "Miss Aoife, why haven't we attacked them yet?"

The red vespire looked up, shaking her head. "The leaders..  Queen Nouvel, Azariah the Arbiter.. King Ericius, and the Woolyne Queen… Have decided not to make a move at the moment."

Caramel nodded, "It would expend too much energy. Best for now we observe."

Reina shuffled a bit, looking unnerved. "I see. I don't doubt the decision, but I don't like the look of their movement…"

"A pouflon is approaching!" Caramel interrupted.

"Are you two.. The twins? Jishui and Tejat?" Aiza asked, landing softly onto the tower top, in front of them.

One answered: "Yes, we are. I am Jishui. That over there is Tejat. You are here to ask us for help in finding a loved one, like the others?"

The other twin was quiet, body turned away.

"No longer helping, sister?" The bluer one cooed at their counterpart.

"No need. I don't see the use in helping these flesh dwellers, when they haven't given any solution to our problem." Tejat hissed.

Jishui gave a relaxed smile to Aiza. "Don't listen to Tejat. I can help. I only ask that you help us fight this 'corruption'. It appears to be keeping us trapped here."

"If you hadn't heard, we are.. Stars. Celestial beings." Jishui motioned at himself and Tejat. "We're trapped here in this place against our will, and we've been trying to find a way out… We think it may have something to do with the corruption."

Aiza's head spun again. Stars? Celestial beings? First strange felines called Woolynes, and now this? The rift sure had a reputation for drawing in all sorts.

Next she figured she'd be meeting a god or something.

Unfazed by the pouflon's intensely confused face, Jishui spoke again. "Shall we get started in finding your loved one?"

The others on the tower minded their own business as Aiza and Jishui took one corner of the tower.

"So, how does this work?" Aiza asked, wondering if some sort of soothsayer trick was about to occur.

"Just think of a warm memory of the loved one you want to find." Jishui simply advised.

"A warm memory…" Aiza looked up, and closed her eyes slowly.

She thought hard. Something fuzzy, familiar, and warm… Hmm...

A bright, yellow vision blurred into her view as she remembered a fond memory.

She was still a young bloom, and her face was buried into a farmer ursuki's chest. A field of gold surrounded them, framed by an orange barn, and golden clouds. They tightly embraced eachother.

"Come back and show me your magic sometime. Don't be a stranger!" The brown ursuki said, his mustache curving a kind smile.

"I will! I'll visit you when I'm a cool mage!" Aiza grinned, her little bloom tail wagging, her eyes filled with happy tears. "It's a promise, Uncle Klein!!!"

"Haha, I look forward to it. Take care." The ursuki spoke, letting her go.

The memory became bright, and a soft yellow glow enveloped the ursuki and the orange bloom until it was a blinding light.

Aiza blinked her eyes open, and she noticed that Jishui had lightly tapped his horn against her head.

A bright light formed on his horn, hovering above it, before it was absorbed. The starry pouflon's eyes shimmered.

"There. He is joining the other corrupted in a huge group--no, an army of other corrupted." Jishui said, now bearing a concerned face. "It is a huge army. He is surrounded by other woolyne, vesp, poufs, suki…..All corrupted."

Aiza began to shake. "What direction?! I gotta get to him!"

"No need…. They are coming towards the camp."

Jishui and Aiza's heads turned to the horizon, where a festering giant black sphere sat. It was far, but it looked foreboding, slowly increasing in size. The colorful patched sky even moved away from it, like it was afraid of the dark mass below it.

The others on the watch tower looked on in horror.

"That's not good, not good at all." Caramel mumbled, observing it with her telescope. "Aoife was right, the corrupted are coming together in a giant army."

"If Uncle Klein is in there, I gotta get to him! Army or not…" Aiza said, readying her wings. She felt a tinge of fear, but she shook it off- she had to save him. Even if it meant facing a horde of corrupted.

A gravelly voice boomed over the tower, catching all of their attention. Seren rose from below, her giant dark figure looming over Aiza, beating her wings. Her black figure blocked the view of the dark army in the distance, and she looked furious.

"Hey-- Wait!" Aiza growled, struggling. The pouf was grabbed by Seren's gold smoke claw, and its grip squeezed her limbs together. The vespire gave a low, angry grumble.

"As my assistant, I told you to stay put-- away from the rift." Her gold eyes narrowed, piercing into Aiza. Her expression bore a mixture of concern and anger.

"But--" Aiza wheezed. "I gotta save him! Uncle Kleins in there!"

Seren hissed, a hint of pain in her voice. "But I refuse to let you jump into your death. There are hundreds of corrupted creatures in there, and you're nowhere near ready to face them."

The orange pouf protested, wriggling and tugging her red cape around, glancing at her side bag of potions and runes.

"But I've prepared this time!"

"I'm taking you back to Aequor. This place is too dangerous."

The vespire stormed away, dragging Aiza along through the air, the pouf kicking.

Aiza cursed, trying to bite at the golden smoke claw, and coughed up sparkles. How she wished she had a projectile spell she could use at this moment… A fireball to free herself, by starting a fire around Seren… That way she'd have to let go. But alas. She could only enhance her body, and it was useless when she couldn't move.

Aiza's wishes of freedom did come however, albeit in the worst way possible.

Off in the distance, a deafening tearing sound roared. It reverberated across the land, ripping through the camp. The flags of the castle tilted from the sound, and multiple guards were blown back from the walls protecting the camp. Tents and weapons fell off their posts from the vibrations in both ground and air.

Yells and concerned voices coated the entire area, and became louder as they looked up and realized what was happening.

The sky slowly bent. The patched, quilted, colorful sky that held doors to all other universes, was pinched like an oversized blanket, and pulled towards the black sphere in the distance.

It looked as if a black hole was sucking the sky towards it.

Then, in a flash of gray light, the hole disappeared...

And reappeared closer to the camp.

The hole, now up close, revealed itself.

It was a giant black sphere, towering above the puny camp. Pockets and dots of red distorted over the thing, like a corrupted planet. And upon closer inspection, horror struck across all who peered at it.

Hundreds, maybe thousands, of corrupted creatures of all sorts idly hovered over the camp. They idly floated, red eyes staring straight ahead.

In the middle of the sphere, a sharp horn emerged, trailing red and black mist. A tall, dreadful looking corrupted pouflon rose from the depths of the thing, wearing a pointed crown. It gave a crooked smile.

Seren's grasp loosened on Aiza when she stared at the pouflon above. "No… It can't be…" She muttered.

At the corner of Aiza's eyes, the pouflon saw a familiar corrupted ursuki floating in the air with the other dreaded creatures. One she recognized even from afar. Her eyes widened. It was… Uncle Klein!

Aiza gets real close to finding where uncle klein is.... even meeting a star?! Crazy. But things get out of hand... 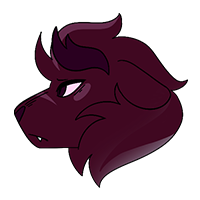 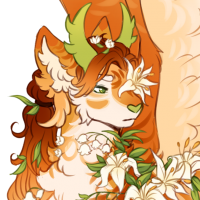 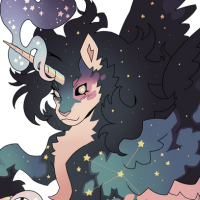 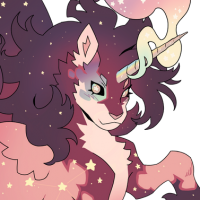