Aiza woke to the sound of clinking glass again. Her eyes met the shelled ceiling of the barracks, and rolled to see a red blur at the edge of the room. Blinking, the blur turned out to be Mithril, who was tediously placing the glass beakers and potion bottles in an orderly fashion on the table Seren used to make her medicine.

“Oh, its you… Oog… My head…” The orange pouf raised herself, shaking her noggin. Whatever Seren had given her, it had knocked her out for a good while. She felt better, but was struggling to lift her consciousness from the clouds.

“Sea Kelp. Feeling any better?” Mithril asked, his tentacle ears turning towards her as he slowly swiveled around.

“Loads. Where’s Seren? What are you doing here?” Aiza looked side to side.

“About that. She’s gone into the rift with the other squads of warriors and volunteers.”

“A full two days. She asked me to check on you here and there.” Mithril’s eyes rolled about the room, sighing as he unloaded the annoyance he had noticed over the two days. “What an awfully messy room, does Seren usually just cram every supply she has into every crevice here?” His stray tentacle hair pushed the beaker he had placed to perfectly match the distance between the others.

“Get used to it, she likes having surpluses of everything… --Wait that’s beside the point!” Aiza shook her head. “TWO DAYS! That’s too long. I have to go back in there!” The pouf leapt out of her netting towards the door.

Mithril noticed her bandaged waist, from her previous attempt of exploring the rift, and swiftly blocked the door, giving her a concerned look.

“Sorry Sea Kelp. Seren asked me to keep watch, and the Aequorean guard force also tasked me to prevent you from causing anymore trouble. They both are not thrilled to have you running about, especially since you went and accidentally corrupted a few civilians.”

“But-- that was an accident!” Aiza stood her ground. “Listen, I feel like I was onto something when I went in there. I can’t explain it… But I know it had something to do with someone I’m looking for!”

Mithril shook his head, tentacles swaying. “Whatever it be, I’m sure Seren can tell you about it later. I implore you to stay here and wait until they come back. Besides, are you in any condition to go in?” His nose pointed to her bandages.

Aiza turned away, frustration glazed across her face.

From somewhere deep within her, the void’s voice echoed in her mind.

The pouf grimaced as a feeling of darkness washed over her. Shaking it off, she turned to face Mithril with fire in her eyes. No! She had to help. Even if her strength was limited.

“I’m going. If that means I have to barge through you, I’ll do it!” She growled.

“Don’t be foolish…” Mithril warned, but he was surprised. The pouf charged and the warrior barely reacted in time to stop her, blocking her kick with his trident’s length.

“You’re daft! Stop this at once!” He hissed, but Aiza was persistent, and she pushed into the vespire, almost against the door.

With a big huff of water, Mithril drove her back, and the two glared at each other, a few feet apart.

“Why in Aequor name do you want so badly to swim into danger again?!” He barked.

Aiza looked up at him, fiercely.

“It’s… Because I want to find my uncle. He disappeared months ago when he got corrupted…”

Her teeth clenched. “We arrived at Goldfair… Where he lived, to visit him… And found it in shambles. And I saw him get infected by a large beast… He attacked us… And then he flew away. We haven’t had a clue since..”

“What…” The red vespire had barely words. "But he got corrupted. Isn't he a lost cause?"

“If we can find him again, we can cure him. I just want to see him returned back to normal, smiling and safe..” Aiza finished.

The pouf stood firm, and the vesp in front of her stared back in surprise, teal eyes meeting her firey pupils.

Mithril straightened up, slowly sheathing his trident. He could clearly see the conviction in Aiza’s face. “Sea Kelp. I see you have much determination to find your family. It is admirable. And if what you say is true… Then I may let you off, on one condition.”

Though he disliked the idea of sliding by his duty, he had just thought of something else...

“What?” Aiza raised her eyebrow.

“About the corrupted ones... Is it true that they can be cured even after a long period of corruption?” Mithril asked.

The pouflon gave him a quizzical look. “Of course we can cure corrupted lons who have been running about. It requires a lot of healing magic, but if you catch them it’s possible!”

The warrior almost staggered, he raised a claw up to his chin, thinking hard.

"The comrades I lost when my division set out to fight the wave of monsters. I had thought them to be a lost cause when they got corrupted. They disappeared just like your uncle." Mithril spoke, his voice carrying concern and a tremble. "Do you think… Maybe they could be found?"

Aiza nodded. "I believe the rift holds a clue to where any corrupted lon has gone… So there could be a chance you could find a lead on where they've gone too."

At that, the warrior looked slightly desperate for a second. He had been exiled, but he wanted to fix his mistake, a mistake that he had thought costed his comrades their lives… But if they were still out there, he could right his wrong…!

"So what's the condition?" Aiza asked, "What's with the questions?"

Mithril straightened up. “We both go exploring in the rift. I’ll still be able to keep watch over you, and since it won’t be in Aequor… You won’t be doing any kind of damage. Also..."

A glint sparked in Mithril's eyes, matching Aiza's fire. "If what you said about the corrupted is true… Then I want to find my lost comrades.”

Aiza grinned without a second thought. "Right, you had a whole division that got corrupted! I can help you find them too!"

The red warrior smiled. "Then it's a plan…"

The two began to prepare for the second attempt at exploring the rift, packing bags of potions of all sorts of colors and food, shamelessly grabbing from Seren's stockpile. Aiza made sure to take as many of the pink antidote potions as she could. She didn't have healing magic, but these could help whenever they ran into corrupted ones. The pouf also stuffed in one or two light runestones, to use as lightsources, and firestones for campfires.

When their bags were tight and hefty from the supplies, Aiza dressed into a large dark cloak that covered her red mantle and entire orange body. They then waited for night to fall… Mithril had suggested to wait for the cover of darkness, as to not alert the guards that she was loose. Once it was time, they would bolt for the temple and sneak into the rift…

And there, they would begin their perilous search for their loved ones.

aiza prepares to get back at it again! this time with a bud!

Submitted By teadino
Submitted: 11 months ago ・ Last Updated: 7 months ago 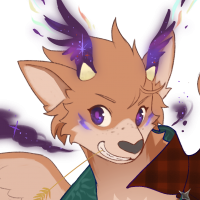 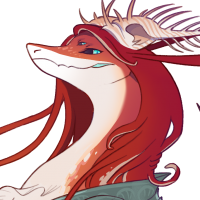