Fall of the year of Emerald

It's the second day of my journey to appease the Mage's Order. It's annoying really, apparently I couldn't just waltz in and present my detailed research on the Elemental Shards so easily. Instant rejection to years of work. They didn't read a word, all because I never graduated from any school of magic.

Sigh, it's what I get for following in the footsteps of Master Marza… No way can I get a graduation letter of approval from her either, not in a million years.

So, I'm stuck going around helping members and friends of the Mage's Order until I gain enough notoriety to "officially" graduate. How riveting!

I've been around for so long, I'm not even sure if any errands and quests have anything new in store for me anymore. A blessing and curse from being a travelling magic anomaly investigator I suppose. Once you've found patterns, it can get mundane. Either way...

One small blessing is the sky and weather had been exceptionally clear at least.

My first stop was to find Remiel. I planned to share my observations of some strange star formations I noticed in Ebony Wreath.

I found the pouf on a hill just outside the Asterfall college, equipped with a telescope. Before I could even introduce myself, he asked for my help.

He saw a strange shooting star that always appeared at the same time, every night. He would try to follow, but it was so fast that he would lose it everytime around the mountains. Every one of his friends were busy around this time, so he needed all the help he could get.

I agreed, also curious about a star that can  disappear and reappear. Now that was an anomaly I haven't heard of! Could this be something new?

We staked out at the foothills, still in view of the college.

The snow fell silently, as it always did. We could see the liveliness of the school's lights as dinnertime hit peak hour. Remiel was tense. He seemed good natured (not many would ask a vespire for help) and seemingly patient, but I could see his anticipation. "Almost time." I heard him say.

A bright shining light--a star-- appeared in the sky,  shining brighter than all others.

Remiel and I tailed after it,  trying to fly as fast as we could.

Whatever it was, it was fast.

It streaked across the sky, creating a hot light trail after it.

We were barely keeping up.

I realized we were slowly falling behind. However… I had a trick up my sleeve. "Remiel, you ever catch a star?" I called to him.

"No!" I could see his visible confusion.

"Well get ready for your first!"

I puffed out my pneumir ahead, with all my might, reaching out as far as it could go, and made a wall right in front of the star. To be honest, I didn't think this would work, but it somehow did. The star hit it like a net, and I  twisted to Remiel's direction, the smoke acting like a giant fly swatter, batting the star to the pouf.

The pouflon prepared himself, the tips of his horns glowing as the star was now careening towards him.

He slowed it,  but ended up getting hit by it. "Egads, it hurts!" I heard him cry. The heat of the star must have seared him!

But then we heard something disturbing.

"Ow! What in all cosmos are you doing?!"

Remiel and I dropped our jaws.

The bright light was now hovering before us. We stared in awe at the twinkling white sphere, our eyes watering from how blinding it was.

"A-are you a star angel? No.. a star god?" Remiel asked nervously. "If so, I'm sorry, I must have interrupted your divine business!"

I got excited and asked, "Do you grant wishes? Can you grant me one?"

Please. Oh please. I really need a giant pippet to help carry my travelling carriage around!

"What the lon-heck are you on about?" The white light said.

Slowly the light diminished, and we saw the silhouette of a flamboyant pouflon before us. They were still divine looking, with cloudlike, luminous markings.. However, they were very much a pouflon, not a star.

Remiel was the first to apologize to the annoyed pouflon. I followed his lead. We explained about trailing this 'star' that appeared in intervals. The pouf, whose name we quickly learned, Jet, was amused. They explained,  in between giggles,  that they go for a nightly jog around this time in the mountains, and liked to go fast to catch the auroras in this season. Sometimes a bit too fast, becoming very bright and hot from her glowing markings, from her body going as pouflonly fast as she could. That explained the bright light in the sky, she resembled a shooting star!

Remiel, I could tell, was very embarrassed. Promising to make it up to her with a spare telescope he had around.

Jet didn't seem as interested but took him up on it nether the less.

After parting ways, (and a final apology), Jet returned to her stroll, while Remiel and I returned to his spot on the hill.

I finally was able to give him my star observations in Ebony Wreath, to which he found very interesting.. He was kind enough to offer sending me updates on  any strange goings with the stars, and if he finds anything from my observations. This was his thanks in return for helping him find the truth behind the odd star.

Hopefully Jet catches the aurora in time, and Remiel wasn't too attached to that telescope.

In the end, many mysteries, like this one,  turn out to be mundane.

In my travels, more or less, the investigations I've been called in for are either this or a real anomaly. Some anomalies have even become a normal for me… Oh how I long for something new, something different.

The star was amusing though. Heh. Still...

I do hope my next stop could be more interesting. This will be a long journey to get officially graduated by the mage's order, so I hope it is enlightening.

seren and remiel investigate an odd star that disappears and reappears every night.

mage quest time lets gooooo. aint gonna lie it was a bit of a brain tumble to figure out how to approach these for seren haha. i really like where its going, it'll make for some fun scenarios! 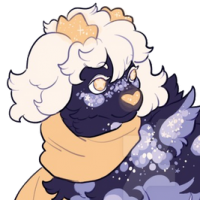 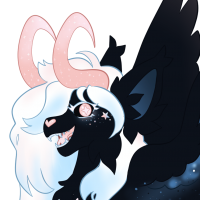 In the rich text editor:
[thumb=229]
In a comment:
[Black Mage Quests #1: The Odd Star by teadino (Literature)](https://www.play.pouflons.com/gallery/view/229)
There are no comments yet.